“Sometimes to win we must lose

– One Day at a Time, Athenaeum

There is one thing I pray for every day, and which will forever remain in my daily repertoire of wishes to the Almighty — that is, the opportunity to see more and more of this world, alone or in the company of my loved ones.

Last month my prayers were answered when an opportunity to visit Kazakhstan suddenly arose — some old family friends of ours, who had lived in Colombo with us two decades ago, were about to be posted somewhere else from Astana, where they had been based for the past three years. This was going to be the only opportunity we had to visit Kazakhstan, under the protection of diplomatic acquaintances and with the promise of free accommodation. My mother and I therefore decided to meet in Astana. After a few days here we were then scheduled to depart for Almaty by train, and later, part ways — she to Kuala Lumpur, while I was to fly back to London via Istanbul.

Astana (Астана) impressed me, with all its futuristic architecture and impressive skyscrapers paid for by the mineral resources it is abundantly blessed with. Previously known as Tselinograd (Целиноград) under Soviet times, it was only as recent as 1997 that Astana replaced Almaty as the capital city of the 9th largest country in the world — and it was certainly built to impress.

In my hours-long walks around the city, I could truly appreciate the wide pedestrian/cyclist sidewalk lining its eight-lane avenues (especially coming from Cambridge, where us cyclists are constantly fighting for our slice of the road with crazy taxi drivers). The city is scattered with beautiful parks, which in this late Februarian winter is still piled with snow I shamelessly rolled around in while Kazakh strollers looked on, completely amused by my antics.

Our 14-hour train journey south to Almaty (Алматы) was perhaps the highlight of our trip. As a treat for my mother, I decided to book us the “Luxe” (люкс) coach with only two beds, which meant we had the whole compartment to ourselves. It was remarkable to see — for hours on end — the flat steppe countryside outside our window completely covered in snow, which decreased significantly the souther we went. There was so much snow that we could hardly tell where the steppe ended in the horizon and where the sky began.

This train ride reminded me yet again of how the journey sometimes matters so much more than the destination. In the train, we kept ourselves busy and did not want to ever reach Almaty — I wrote in my  Moleskine, read through a draft of my thesis, watched Harry Potter and the Order of the Phoenix, even managed to squeeze in a few pages of Dostoevsky’s Notes from Underground, which complemented well with the beautifully desolate, snowy  landscape just on the other side of our unwashed train window. 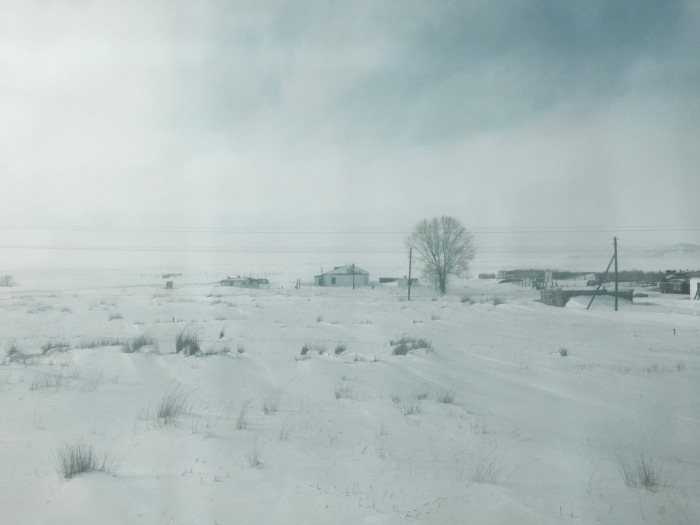 We reached Almaty safe and sound at 23:59 that evening and was warmly received by our Airbnb host at the train station. A fever brought me down on our second and third day there however, but just the banal experience of staying in and watching Harry Potter back to back on our host’s 65-inch flat screen TV with my mother next to me — while it was snowing heavily outside — was equally extraordinary.

Kazakhstan is a rich country — in many senses of the word — and there is still so much of it to be uncovered. Even after being detained by the immigration officer at Almaty’s International Airport — who, puzzled by the stamps in my passport, was reluctant to return it to me — I know I will certainly return, perhaps with a pair of hiking boots in time for the summer. Nevertheless, it would still please me tremendously if the next time my wish above were granted, a new destination and a whole new world awaits.

One thought on “One Steppe at a Time”